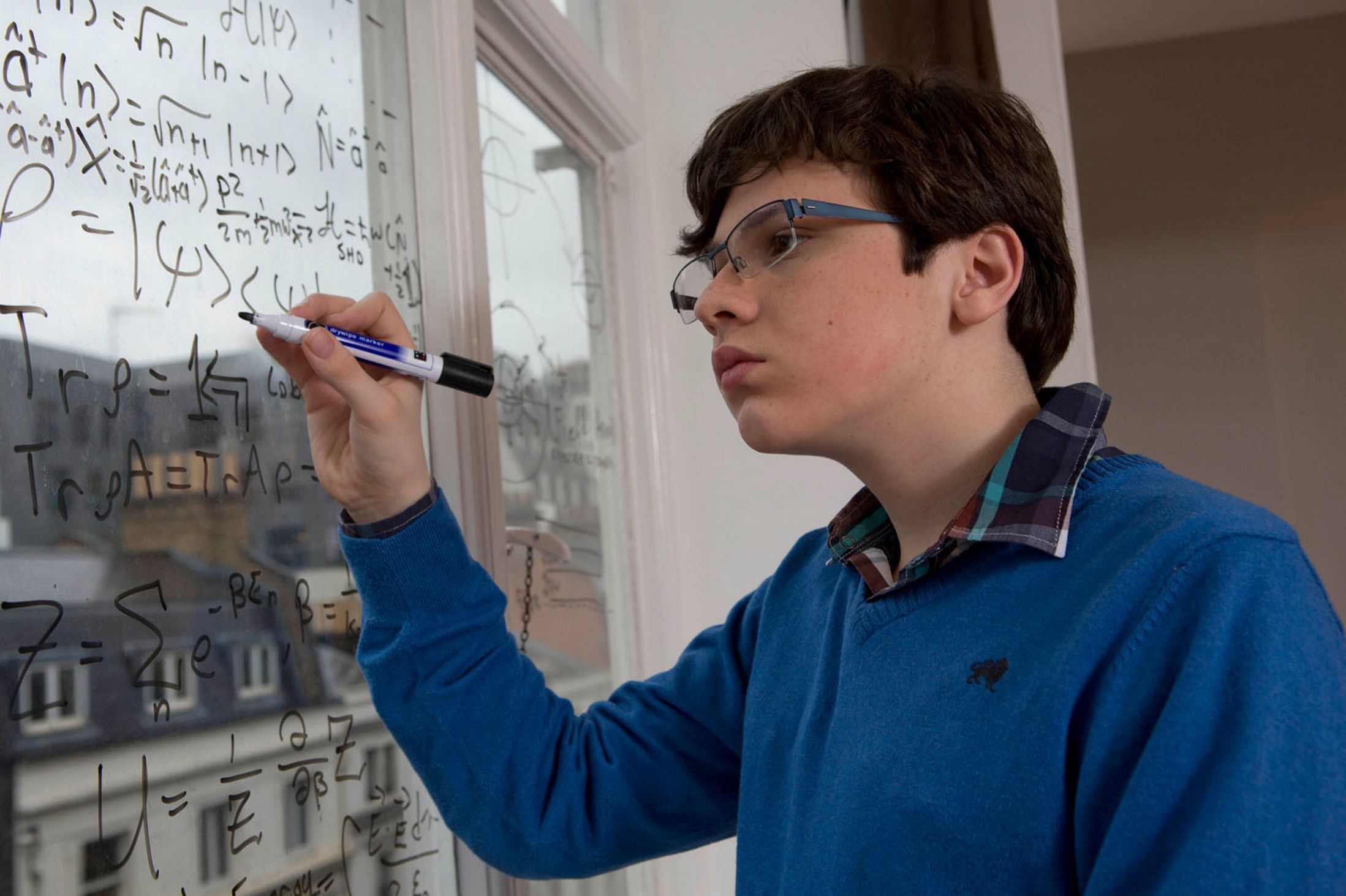 The autistic child pictured above, Jacob Barnett, is a prodigy.

He has a reported IQ (170) that is higher than Einstein’s.

Since 12, he has held down a paid summer math and science internship.  At 13, he was the youngest ever published scholar in a certain prestigious physics journal.  That same year, he also graduated with honors in math and physics through a full-ride scholarship at the joint Indiana-Purdue University in Indianapolis. He is currently pursuing his Masters degree.

His parents are special in the way that they decided to nurture his genius.  And it is their simple approach to nurturing Jacob’s raw genius that stands out, and is definitely worth retelling.

At the young age of 2, his parents noticed that Jake would regress – he stopped speaking and making eye contact.

Since their child was regressing further into his own world, his parents took the advice of experts and arranged for speech therapy, physical therapy, developmental therapy, and occupational therapy.  They had the therapists meet them at their home.

But it wasn’t the professional therapy that got him to come back out of his world.

As he started to attend school, the experts told his parents that he was incapable of learning, incapable of socializing with others and that he would never even learn to tie his shoes. They recommended putting him into the developmental special education program to “slow” the learning curve for his benefit.

But they obviously did not see the genius in Jacob like his parents did.  And above all else, his parents just wanted him to do what he loved.

By about 5-6, Jacob was becoming progressively more skilled with his communication. He was still technically “behind” any social norms when it came to that category of learning.  As for other categories though, he was light years ahead of them.  Describing Jacob at that point, Michael Barnett said:

[quote style=”1″]He was coming home asking us, “When am I gonna learn something at school today? I want to learn algebra.”[/quote]

By 8, Jacob was getting increasingly frustrated that he was unable to learn beyond his elementary school math.

So his parents found a solution:  they had arranged for him to audit college math and science courses after he finished his 3rd grade homework.

What surprised his parents is that not only was their son sitting in on college level courses, but he was actually actively engaged in the class discussion.  The professor would ask the class a question, and he would answer.  Then he would go home, do the homework assignments, and turn them in to receive A’s.  It even led to some grumbling that his mother was doing his homework and had nothing better to do.

To his parents, it was becoming a little more clear that elementary school was not going to be enough to challenge their son.

At the end of the semester, he took his Astronomy course final, and aced it. It was then that the University noticed him and they would eventually lend an invitation to him to attend their school.

And it turned out to be a great decision.

He was invited to attend the University.  But first, he would have to prove that he could sit still and pass their entrance exam.

Jacob saw this as an opportunity. He took a stack of high school math books, and he determined to teach himself the contents therein. He felt determined that if he wanted to attend college, then he would need to be prepared for the Calculus and Trigonometry courses that he would be taking at the university. The 10 year old finished the task in a mere 2 weeks.

[quote style=”1″]60 Minutes: Kristine Barnett: That was the most determined thing I’ve ever seen anybody do. He had to sit in a calculus class to prove to the university that he could sit still. And Jacob was like, “I’m gonna participate in that class discussion. So if I need to learn algebra one, algebra two, geometry, trig, that’s what I’m gonna do.” And he took a stack of books, and he sat down, and he just–

Michael Barnett: Went and taught himself. All of it in two weeks.[/quote]

At this ripe age of 10, many of Jake’s symptoms autism had disappeared.

[quote style=”1″]Michael Barnett: There are certain traits that are still there. And if you really, really knew what you were lookin’ for, you could dig ’em out. But otherwise, you know, that– I got–ten-year-old kid at that point in time that just happens to be doing next level work and no one knew anything different.[/quote]

No one could have predicted that Jake would even make it to college.

At age 12, Jacob was getting paid for doing scientific research.  He later became the youngest ever scholar to be published in the prestigious academic journal for physics called Physical Review A.  He’s on track to graduate this year at 14 (if he hasn’t already) with honors in Physics.

But his plans don’t stop there.  In addition to plans to continue school to get his Ph.D. in astrophysics, he is also currently writing a book to help the rest of us to overcome our own math-phobias. He also is working on becoming a professor.

Jacob Barnett, diagnosed with severe autism at a young age, is now 15 years old, and one of the world’s most promising physicists.

The real story here though, is not just Jacob’s phenomenal abilities in Math and Science.

It’s Jacob’s parents: Kristine and Michael Barnett.  They raised an extraordinary child out of what would be seen as an impossible situation by most other parents.

I believe that they had such great success solely because they loved their child so much that they were able to help him to do what he loved, which began him on his path to realize his extraordinary potential.

They gave him exactly what he loved most, and gave him the time he needed to explore his world, to grasp and learn what he was thinking so deeply about in his earlier years.  I believe that it was obvious to Jake’s parents that his passion was leading him to new horizons, and was even making him stronger in the areas of life that the experts said would never improve.

It could even be said that his faults and weaknesses are made insignificant because of it.

On the Glenn Beck Show, in response to a question regarding the advice whe would give other parents that may receive a tough diagnosis like theirs, Kristine had this to say:

Or could it be a sign of his brilliance?

[warning]As always, if you enjoyed this article, comment below and share it with your friends.[/warning] [info]Catch up with Jacob at Jacob’s House. To learn more about Kristine and Michael Barnett’s method for nurturing genius, check out their book, The Spark: A Mother’s Story of Nurturing Genius.

Check out the latest article about him at MacLean’s.[/info]