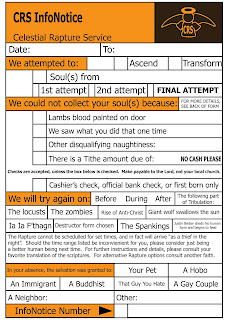 So this #Rapture hastag is trending here on twitter and facebook.  I want to to ask the question to all of you out there who are reading my blogs (all 2 of you):  What is are your plans for the end of the world this coming saturday, May 11, 2011?  Praying? Repentance? Bible-studying? Partying? Looting? Pranking?

Have you drank the kool-aid yet?  Have you gotten your nikes all shined up and ready for the end?  Have you organized your animals to be watched while you are in gone rapturing? Have you chosen what your gonna wear for Jesus yet?

If your not familiar with this story, it’s been all over the social network sites.  Lemme post a few links for you:


1) How to make an easy cool $80 million bucks? Make up a date for the #Rapture and people will give you their money! https://goo.gl/ERc3v
2) the most awesome Craigslist post for a #rapture deal …https://bit.ly/j9SQvx
3) Zombie Apocalypse Post Crashes CDC Web Site: A zombie apocalypse prevention guide … https://bit.ly/jO8DT5
4) The official tract from the crazies that posted this stuff … https://on.fb.me/kFUypr
5) one of the news stories published over the last week — Apocalypse Soon: Christian Sect Says May 21st. … https://bit.ly/kQPC7l

One of the funniest things that I have heard is that there are actually groups of Believers that are getting together money to find people to watch after their animals while they are gone in the Rapture.  Only thing they require to help is that you are an athiest. 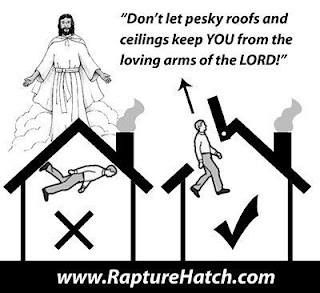 11) “We know the rapture‘s not really going to happen tomorrow because Nicolae Carpathia is nowhere in sight.” – Joel McDurmon
12) #theawkwardmoment when the rapture happens and you’re still alive.
13) Do you think the Rapture would mind terribly if I blogged it?
14) Yesterday was Thursday Thursday, but today it Friday Friday, tomorrow is Rapture and Sunday comes afterwards……
15)*blank stare* RT @thebookofcalvin: Just got my last McDonalds meal before the rapture. Man, its becoming real.
16) @sj39 Didn’t you hear? end of the world tomorrow, no need to plan beyond Friday night. Have a nice Rapture!!!
17) Lmao! RT @KBIILIONS: Rapture has been postponed to nxt saturday!! Thanks to JEGA
18) I swear if they give me an appointment 10 mis before its time to go I, myself will be the source of the rapture!
19) @allieblablah just saw that link on fb.. we should start a post-rapture porn disposal service for all those old fine christians out there.
20) Anyone else keep seeing references to #rapture and thinking Bioshock?
21) (from the aptly named ‘TheTribbles’) Know what humans need to save you from the #rapture? Tribbleation Force!
22) @FRESHMikala Learn how to fight the undead. That’s my plan anyway. 😀 #DoomsDay #Rapture #seriously
23) @Sir_Dongizle *pops 1 bottle* Rapture? *pops 2nd 1* the world is still young Bro *lights cigarette* 😀
24)Also kind of pissed that this rapture is happening before I get a definitive answer on the effectiveness of crystal deodorant. #WhyNowOLord
25) Wouldn’t it be great if the guy is right, but it only happened to him? #rapture
26) Tell me, what kind of loot will you be foraging for post rapture?
27) @somegreybloke explains how to prepare for #rapture in case you are curious. https://www.youtube.com/watch?v=hmX-lZOYcVA
28) RT @MPFletcher: First early rapture sighting!! … Nope … Nope … Neighbor kid is on a trampoline.
29) saturday is the rapture, I’m going to be on a bus for over 4 hours.
30) @natalepirrotta I love YOU! Rapture after party? I hear it’s gonna be SICK! #maybetherewillbefreedrinks

haha I could go on forever with the hilarious stuff on twitter.  And this isn’t even including the regular hilarity that follows popular tweeters like @GarryShandling, @BillyCrystal, @mcgoogles, @WendyLiebman, @kathleenmadigan, and @SteveMartinToGo.

The rapture has also spawned some hilarious rapture pickup lines like:
1) Before the world goes up in flames, let me light your fire
2) Don’t mind me, I’m just looking at your left behind.
3) How would you like the clap for 18 hours? (totally inappropriate but LOL)
4) How great is this #rapture for single dudes tonight? No end to the pick up possibilities.


haha the rest is too vulgar to mention here…


Anyways… That was fun.. I may post again about life post-rapture.  We’ll see if there really will be zombies and  looting, or just laughter and joy from the world at the expense of all the believers who were actually “left behind.”