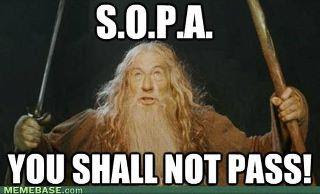 I received this message in my email yesterday.  Success!  This message captures the excitement that results from a strong protest.  We were heard, and at least for this issue, things are changing back to the people’s favor. Now if only we can do the same thing for the NDAA!!

From Tiffiniy Cheng at Fight For The Future:

A big hurrah to you!!!!! We’ve won for now — SOPA and PIPA were dropped by Congress today — the votes we’ve been scrambling to mobilize against have been cancelled.

The largest online protest in history has fundamentally changed the game. You were heard.

On January 18th, 13 million of us took the time to tell Congress to protect free speech rights on the internet. Hundreds of millions, maybe a billion, people all around the world saw what we did on Wednesday. See the amazing numbers here and tell everyone what you did.
This was unprecedented.

Your activism may have changed the way people fight for the public interest and basic rights forever.

The MPAA (the lobby for big movie studios which created these terrible bills) was shocked and seemingly humbled. “‘This was a whole new different game all of a sudden,’ MPAA Chairman and former Senator Chris Dodd told the New York Times. ‘[PIPA and SOPA were] considered by many to be a slam dunk.’”

“’This is altogether a new effect,’ Mr. Dodd said, comparing the online movement to the Arab Spring. He could not remember seeing ‘an effort that was moving with this degree of support change this dramatically’ in the last four decades, he added.”

Tweet with us, shout on the internet with us, let’s celebrate: Round of applause to the 13 million people who stood up – #PIPA and #SOPA are tabled 4 now. #13millionapplause

We’re indebted to everyone who helped in the beginning of this movement — you, and all the sites that went out on a limb to protest in November — Boing Boing and Mozilla Foundation (and thank you Tumblr, 4chan)! And the grassroots groups — Public Knowledge, Electronic Frontier Foundation, Demand Progress, CDT, and many more.

#SOPA and #PIPA will likely return in some form. But when they do, we’ll be ready. Can you make a donation to Fight for the Future, to help us keep this fire going?

P.S. China’s internet censorship system reminds us why the fight for democratic principles is so important: In the New Yorker: “Fittingly, perhaps, the discussion has unfolded on Weibo, the Twitter-like micro-blogging site that has a team of censors on staff to trim posts with sensitive political content. That is the arrangement that opponents of the bill have suggested would be required of American sites if they are compelled to police their users’ content for copyright violations. On Weibo, joking about SOPA’s similarities to Chinese censorship was sensitive enough that some posts on the subject were almost certainly deleted (though it can be hard to know).
…
After Chinese Web users got over the strangeness of hearing Americans debate the merits of screening the Web for objectionable content, they marvelled at the American response. Commentator Liu Qingyan wrote:

‘We should learn something from the way these American Internet companies protested against SOPA and PIPA. A free and democratic society depends on every one of us caring about politics and fighting for our rights. We will not achieve it by avoiding talk about politics.’”